Tours to the Imperial Villa of Pausilypon 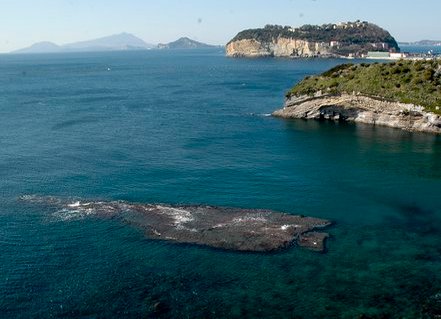 Beginning in the second century BC, the Campania area, in particular the Bay of Naples, became the seat of aristocratic villas belonging to the Roman nobility, who withdrew from the Urbe, leaving behind negotia  (business and the obligations of political life )to devote themselves to otium.

The favorable environment and mild climate are not sufficient to explain why the Roman elite preferred the Bay of Naples for their “holiday periods;” rather, it was the strong Greek cultural matrix that here resisted Samnite domination and Romanization that ultimately attracted the Romans to the gulf called the crater.

Even the name, Pausilypon, or “place that puts an end to worries,” which today refers to the entire Neapolitan hillside, gives an idea of the pleasantness of the sites and the purpose of the villa.

The hillside of Posillipo rises to the west of Neapolis, separating the territory of the city from the Phlegraean Fields, extends toward the sea and, along with the island of Nisida, divides the Gulf of Naples from that of Pozzuoli.

The construction of the villa of Pausilypon probably dates to the second half of the first century BC, when it belonged to the eques Publius Vedius Pollio, who became rich in the East thanks to the offices obtained from Augustus due to the friendship and support he gave the emperor during the campaign against Antonius. At the time of defeat of the equestrian in 15 BC, the grandiose villa was left through inheritance to Augustus and transformed over the course of the first century AD to adapt to the new needs of the imperial court.

Breathtaking views, a theatre, an Odeon, pools, roof gardens and pavilions overlooking the sea would present themselves to the eyes of the Emperor’s guests upon exiting the aphotic Seiano’s Cave, leaving them bedazzled by the majestic spectacle of the residence.

the view of the emperor

The Cave of Seiano

View of Vesuvius from Pausilypon

The tours run from Monday to Saturday